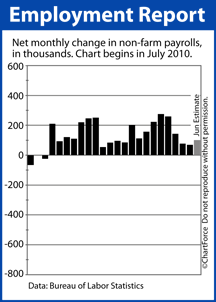 Depending on the strength — or weakness — of the data, mortgage rates will change. Perhaps sharply. Unfortunately, we can’t know in which direction.

If you’re actively shopping for a mortgage , therefore, today may be a prudent day to lock a mortgage.

The job report’s connection to mortgage rates is straight-forward. As the number of U.S. citizens earning paychecks increases, reverberations are felt through the economy.

Next, as the overall economic base grows, businesses produce and sell more goods, necessitating the hiring of additional personnel and the purchase of more raw materials — both positives for the economy.

And, lastly, as more paychecks are written, more taxes are paid to local, state and federal governments. These taxes are often used to fund projects and purchase goods and services which, in turn, grow the economy as well.

Tying it all together, the health of the U.S. economy is a major factor is setting day-to-day mortgage rates. This is why rate shoppers face risk with tomorrow’s Non-Farm Payrolls report.

Between 2008 and 2009, the economy shed 7 million jobs. It has since recovered 3.9 million of them and, Friday, analysts expect to see another 100,000 jobs created in June. If the actual number of jobs created exceeds this estimate, look for mortgage rates to rise.

If the actual number of jobs created falls short of 100,000, mortgage rates may fall.

The government releases Non-Farm Payrolls data at 8:30 AM ET Friday.