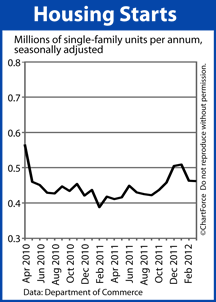 The report is made up of three sections, each related to a phase of the “new home” market. The report’s first part is Building Permits; the second is Housing Starts; the third is Housing Completions.

Of the three sections, it’s Housing Starts that gets the most attention from the press — mostly because, of the triad, it’s the simplest for a layperson to understand. However, the manner in which Housing Starts data is reported can be misleading.

According to the Census Bureau, total Housing Starts fell by 6% in March as compared to the month prior. 654,000 units were started on a seasonally-adjusted annualized basis.

For Housing Starts, it’s the lowest reading in 5 months, a statistic suggesting that the housing market may have lost some momentum. Much of the press covered the story from a “housing is slowing” angle.

A few published headlines include :

Although these headlines are accurate, they tell just half of the story.

Housing Starts did drop in March, but if we remove a subset of the data — structures with “5 or more units”; a grouping that includes condominiums and apartment buildings — we’re left with Housing Starts for single-family residences only. It’s this data that matters most to buyers nationwide.

In March, single-family Housing Starts were down 0.2% from the month prior, or just 1,000 units on a seasonally-adjusted, annualized basis.

That’s hardly a drop at all.