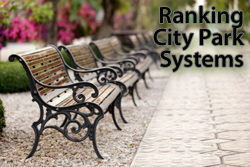 According to the 2011 estimates of the U.S. Census Bureau, between July 2010 and July 2011, city centers grew faster than their surrounding suburbs in 53% of the nation’s largest housing markets.

Cities now compete with suburbs on a number of fronts including job availability, housing costs, and access to amenities, a category which includes proximity to public parks.

Parks are important to a city. Studies prove that parks help to attract home buyers, to retain retired homeowners, and to raise home values. And now, with the creation of ParkScore, it’s easy to compare park systems between U.S. cities.

ParkScore is an at-a-glance assessment of a city’s park system. Published by The Trust for Public Land, ParkScore considers “every publicly owned park space” within the nation’s largest cities and assigns an overall score based on total acreage, services provided, and access.

The maximum ParkScore is 100.

According to its publisher, the 10 cities nationwide with the highest ParkScores are :

ParkScore rankings place a high premium on the “percentage of city residents living within a 10-minute walk of a public park”. It’s no surprise, therefore, that some of the top-finishers included San Francisco, Boston and New York City — three cities known for their abundance of public parks.

The complete ParkScore rankings are available at http://parkscore.tpl.org, along with each city’s score and ranking analysis.